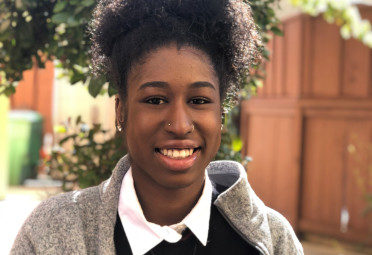 Earlier this month, Mercy Housing resident Sabrina received the San Francisco Boys & Girls Club’s Youth of the Year Award. Youth of the Year finalists are chosen by their local Clubhouse based on “moral character, community involvement, academic achievements, and obstacles that they have overcome.” Sabrina accepted the award in front of a packed ballroom, acknowledging the difficulties she has encountered coming from a family and community with very limited resources. Her success in overcoming obstacles to achievement speaks, of course, to her grit and determination, but also to the support she has received from Boys & Girls Club in partnership with Mercy Housing.

Growing up in the Visitacion Valley neighborhood, Sabrina was surrounded by crime and violence. In her acceptance speech, Sabrina describes the Visitacion Valley Boys & Girls Clubhouse as “a place to grow and learn to be more than my circumstances.” She says, “They believed in me and that made me believe in myself.” In elementary and middle school, Sabrina visited the clubhouse every day after school for help with homework, cooking classes, a dance studio, or even just to hang out with friends.

In high school, Sabrina volunteered through the local Boys & Girls Club. This is how she met Sister Patsy who serves as a Community Liaison for Mercy Housing in Visitacion Valley. Sister Patsy has worked in Visitacion Valley for the past 10 years. For two summers, Sabrina mentored young Heritage Homes’ residents participating in Sister Patsy’s summer youth program as well as providing digital literacy support to senior residents using the shared computers in the community room. Sabrina’s younger sister now attends Sister Patsy’s youth program, and her six-year-old brother participates in the Raising a Leader program.

Mercy Housing has partnered with the Boys & Girls Club to provide services to the youth since the 90s when a clubhouse was opened inside 111 Jones, a Mercy Housing community in the Tenderloin. This clubhouse has been a resource not only for young residents of 111 Jones but also other children living in the Tenderloin neighborhood. The Boys & Girls Club has a proven approach to developing leadership skills in youth, which is a critical part of Mercy Housing’s work with residents. Following the success of this first partnership, Mercy Housing has collaborated with Boys & Girls clubs in other locations, including Los Angeles, Sacramento, and Visitacion Valley.

In 2016, Mercy Housing California and the Boys & Girls Club created the Visitacion Valley Summer Youth Leadership Group, a formal collaboration between the agencies. This leadership group includes young residents who live at several Mercy Housing communities — Britton Courts, Carter Terrace, and Heritage Homes — as well as Sunnydale public housing residents. Bringing these young people together posed a potential risk because, historically, residents from different parts of the neighborhood have not trusted each other and interaction between youth from different “turf” could even be dangerous. Fortunately, both organizations have strong ties in the community and staff with deep roots there. As part of the Summer Youth Leadership Group activities, Erin from Boys & Girls Club and Drew from Mercy Housing regularly took young participants out of the neighborhood on trips, allowing them the opportunity to bond while spending time together in nature, at the beach, and at amusement parks. By getting to know each other in a new context, away from the influences of their past, these young men and women forged unlikely friendships that have continued to present day. This newly-built trust bridged a gap in the neighborhood formed by years of violence and conflict. The Youth Leadership Group has been extended to a year-round program.

Mercy Housing and the Boys & Girls Club are in the midst of launching our most ambitious collaboration to date — a capital campaign to build a new community center, childcare center, clubhouse, and gym in the heart of the revitalized Sunnydale community. This new center will have gathering spaces that encourage interaction and provide a safe location where diverse community members can come together to learn, play, grow, and thrive. The center will include a new Boys & Girls Clubhouse where young people like Sabrina will have the support they need to become the leaders of tomorrow.